Clive Palmer confirmed today that the actions Premier Mark McGowan to introduce an interstate vaccination passport for people travelling to WA was in breach of section 117 of the Australian Constitution. 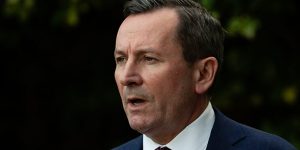 Mr Palmer said he would commence a High Court challenge against Mr McGowan and the WA Government.

“By restricting free movement of Australian citizens within Australia and creating an island-within-an-island, the WA COVID-19 eradication strategy is unconstitutional,” Mr Palmer said.

The WA Government is proposing to legislate the country’s toughest border restrictions, anyone entering WA from delta-plagued NSW will need to show proof they have had at least a first vaccination jab, this is unconstitutional. Its discriminating against the people of NSW.

“We are seeing data from millions of people in the UK and Israel that shows conclusively in regards to the Delta variant that the vaccines do close to or absolutely nothing to stopping COVID infection,’’ Mr Palmer said.

“The vaccines do nothing to stop the spread of COVID-19 given that the infection rate in vaccinated and unvaccinated people is close to identical.

“People from NSW have contacted me saying that they don’t want to be vaccinated as a result of the side effects of the vaccine.

“I have briefed a team of solicitors and will be commencing proceedings within the next 14 day against Mark McGowan and the WA Government.

“The WA Government continues to introduce extraordinary legislation into its Parliament. Mr McGowan’s policies in no way reflect the pushback against compulsory vaccinations of workforces that we are seeing by the big mining companies amid a major labour shortage in the state.

“Labor is destroying the WA economy and the rights and freedoms of its people.

“Mark McGowan has no regard for The Australian Constitution or for what it stands for,’’ Mr Palmer said.