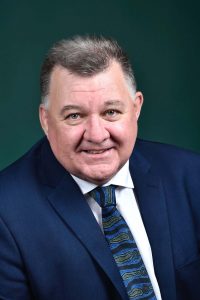 Craig and his wife Vicki care for their son Trent, who was born with Down Syndrome and later diagnosed with autism.

​On caring for Trent, Craig said in his maiden speech that it “has made me a better person. It has made me fully appreciate that each individual has a real value of their own, and the dignity of every individual must be respected.”

Craig has thirty years’ experience in small business across the areas of wholesale, retail, import/export and manufacturing. He entered parliament with a drive and determination to make a difference in this sector.

Like Clive Palmer, Craig believes small business is the engine room of the economy, and that a strong small business sector strengthens the fabric of society.

​Prior to his election to the Federal Parliament, Craig managed a small manufacturing wholesale and import business in Chipping Norton, and was the founder and president of the Southern Sydney Retailers Association.

He is a well-known advocate for small business, including making recommendations to the Australian Competition and Consumer Commission. In 2008, he was critical of the Rudd Government changes to the definition of market power. Alan Jones has said of Craig that he “has forgotten more about the Trade Practices Act than most people in Canberra know”.

​Craig has previously been appointed to key posts, including serving on the House Economics Committee and the Joint Standing Committee on Foreign Affairs, Defence and Trade, as well as chairing the Parliamentary Committee on Law Enforcement.

After leaving the LNP and spending time as an independent, Craig joined Clive Palmer’s United Australia Party in August 2021, accepting the position of federal leader and the role of spearheading the party’s campaign for the 2022 Federal Election.

Get Connected to UAP: