Preparations for the Fairfax Festival Weekend are in full swing with some superb entertainment already booked for what promises to be a great weekend of fun for all the family at Palmer Coolum Resort. 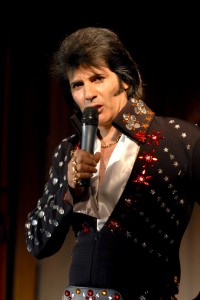 Top Elvis tribute act Dean Vegas will play two live shows – one on the evening of Friday 27th June and the other on the afternoon of Sunday 29th June.

In 2000, Dean competed in, and won, the world’s largest Elvis festival, earning him the title of ‘World Number One Elvis Tribute Artist’ despite fierce competition from the 100-strong field of contestants.

His performances were so impressive that Dean now counts Elvis’ original drummer, DJ Fontana, and tour manager Jo Esposito, among his many friends and admirers.

In his burgeoning career, Dean has been invited as an honorary guest to the Elvis Memorial Dinner, held at the famous Peabody Hotel in Memphis. In 2007, he was asked to perform in Tupelo, the birthplace of Elvis. After his inspiring display he was handed the keys to the city by the mayor of Tupelo, and received a guitar from the Tupelo Hardware store, the shop where Elvis’ first guitar was purchased.

When asked to bring his spectacular show to the Fairfax Festival Weekend, Dean said he didn’t hesitate.

“I’m really looking forward to playing both shows at the Fairfax Festival Weekend and I know we’re going to give the crowd a great time – we can’t wait,” Vegas said.

“All the free entertainment sounds fantastic and I hope everyone comes along and has a really great weekend. Our show is a family show and will suit all ages. There will be something for everyone to enjoy,” he added.

Held at Palmer Coolum Resort on Friday 27th (evening), Saturday 28th and Sunday 29th June, the Fairfax Festival Weekend is Federal MP Clive Palmer’s way of thanking the Fairfax community for their support since he came to office.

On Friday 27th (evening), Saturday 28th and Sunday 29th June at Palmer Coolum Resort, entry to two of the resort’s main attractions, the Palmersaurus dinosaur park and Palmer Motorama vintage car museum, will be free to all Fairfax residents.

Special brochures acting as an entry pass to the Festival Weekend, and featuring the full program, will be delivered to all Fairfax households, starting next week.